China National Association for Liquor and Spirits Circulation and China Brand Strategy Academy jointly released the Research Report on Brand Value of the Third Global Top 100 Wines at Beijing International Convention Center on September 21, 2020. Moutai, Smirnoff and Budweiser rank the global top three wines of the year. The research contents are as follows:

Analysis suggests that the long history and the division of history into periods by the Prohibition in the United States have made the American wine and spirits brands disadvantaged.

Diageo is an established spirits company in Britain. Its former boss set up a brewing company in 1749, which is 27 years earlier than the founding of the United States. In this long history, after many times of merger, amalgamation and acquisition, it possesses a number of global brands. While for Pernod Ricard, the established spirits company in France, it can be dated back to 1805, with the history being only 29 years shorter than that of the United States.

The Volstead Act (Prohibition) of the United States lasted from 1920 to 1933. According to the Act, the manufacture, sale or even transportation of beverage containing more than 0.5% alcohol by volume would all be considered illegal. It was a devastating blow to the American wine and spirits brands and thus caused the division of history into periods. It is therefore not surprising that the United States falls behind Britain and France in the global market.

II. 20 Countries Sweeping the Board in the Top 100 Wines Signals an Unbalanced Development of the Brand Value of Global Spirits.

Let’s push Britain, France and the United States into a further view and look at the global famous wines on a larger scale. There are totally 233 countries and regions in the world. If we make equal distribution in our measurement of the Global Top 100 Wines, there would be one brand being ranked in every 3 countries and regions. However, we have found a strong imbalance. 20 countries sweep the board in the Top 100 and more than 90% of the countries have no brand being listed.

Whereas, the following four countries, i.e. China, France, Britain and the United States account for 63% of the total. There is no doubt that people in every country all drink, but not every country has a presentable brand of wine. With the rapid development of economic globalization, the wine market is becoming more and more concentrated. On the whole, countries with large population, traditional powers, and countries of consumption are the basis of brand growth. 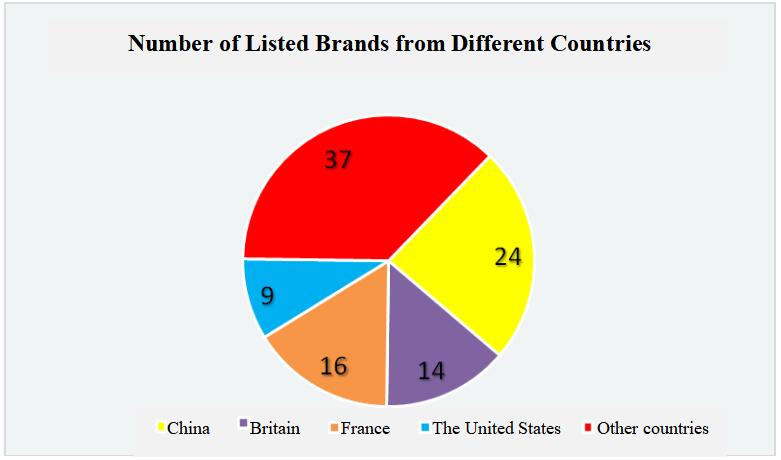 III. Vodka Being Out-of-Date and “the Millennial Generation” Preferring Whisky.

The trend of drinking better and drinking more expensive is growing in popularity. Just like that the expensive craft beer is becoming more and more popular, consumers are more and more in pursuit of drinks like whisky with complex taste, a lot of stories and sometimes with expensive price.

Column chart on the number and brand value of spirits categories on the list of the Top 100 Wines: 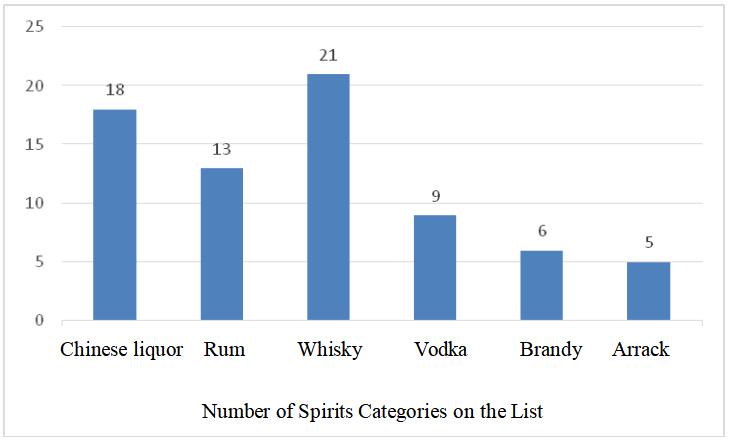 There are two reasons for that: Firstly, it is an industry practice to take the financial data for the previous year of an enterprise as the main measurement indicator. The measuring economic data adopted in the Third Global Top 100 Wines are mainly based on the data of 2019, and the financial indicators of 2020 are for reference. The financial data of listed companies for the previous year were all released from April to June 2020. Combining with the data provided to the Organizing Committee by each wine enterprise, it is found that the major companies all grew well in 2019, leading to the increase in brand value. Secondly, among the hundreds of thousands of wines brands throughout the world, no matter how the market changes, there are always some brands that achieve growth. The world’s most excellent brands and the fastest growing brands have been included in the Global Top 100.

V. The Best Wine Brand – not Lafite but Penfolds.

1982 Lafite is the most successful brand in marketing in Chinese market in recent years, so to speak. From jokes, comic dialogues, short sketches to television and magazines, various kinds of soft and hard advertisements are all-pervasive. 1982 Lafite has obviously become synonymous with the best wine and a status symbol. In the international wine market however, Penfolds from Australia has a higher brand value.

Penfolds is one of the most famous and oldest wine brands in Australia. It is often regarded as the symbol of Australian wine and therefore enjoys the reputation of “the Wine King of Australia”. With a strong brand image and brand presence, Penfolds is one of the few chateaus in the world that have products covering all price levels but can still build up a good flagship brand. 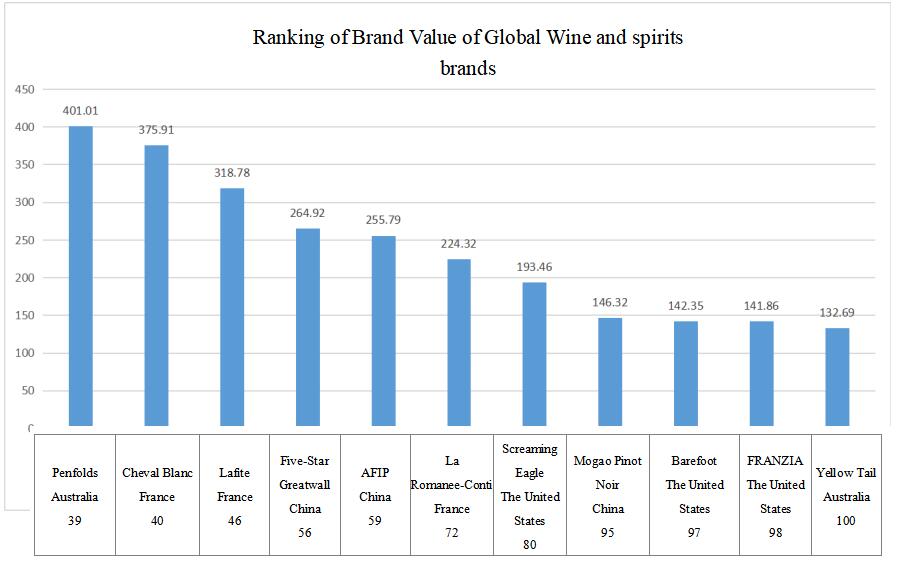 VI. Chinese Spirits Rebounding in Adversity Benefiting from the Achievements Made in COVID-19 Control.

Under the proactive and effective policies on COVID-19 control adopted by the Chinese government, China has become one of the first countries to achieve stage victory in COVID-19 control, economic orders of the country have been in orderly restoration, and the Chinese wine market has warmed up accordingly. Driven by Moutai, the eight major traditional wine and spirits brands have all performed well, and consequently drive the entire wine industry to show upturn in adversity. As the hot summer passes, September will become the beginning of the peak season for sales of Chinese liquor, and the peak season will last until the Spring Festival.

VII. How is the Brand Value of the Global Famous Wines Measured?

With the frequent interaction between Chinese and foreign drinking companions, the Chinese and foreign famous wines are also in mutual circulation. Although they are all known as good wines, there is no specific ranking among them, and it is also difficult for consumers to make a choice when buying and tasting them.

For this reason, CHEN Gang, Secretary General of the Organizing Committee said that it is necessary to release the Research Report on Global Top 100 Wines so as to let both Chinese and foreign drinking companions know the position of these wines in global wine market no matter they are Chinese liquors or foreign wines.

Secretary General CHEN also introduced the evaluation method in details: V = (P1 + P2) * F * S. Brand value = surplus profit * brand strength * brand status. That is to say, the brand value mainly evaluates the intangible assets of wines from the following three major aspects: economic indicators (including revenue and profit, etc.), brand strength (including enterprise nature, industry nature, leading position, stability, internationality and development trend), and brand status (including brand positioning, brand architecture, brand communication, and brand management). Moreover, instead of the brand value of the entire enterprise, it is the brand value of an individual product that is subject to the measurement of the Global Top 100 Wines.

The following is the list of the Third Global Top 100 Wine products in terms of brand value: